Better to Be Lucky Than Good

This article is the thirteenth chapter of The Entrepreneur's Journey, a collection of stories about startup companies and the entrepreneurs who built them. To continue reading about key startup themes and lessons learned, check out the entire series here in The Seraf Compass, or purchase the book on Amazon in paperback or Kindle format. 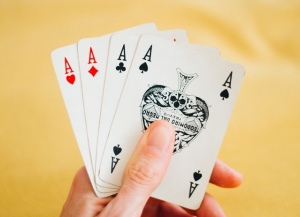 Christopher has been known to quip every now and again, “Sometimes it is better to be lucky than good”. Like most humor, this phrase has its foundation in truth. When it comes to different types of luck, good timing can be one of the most powerful kinds of luck you can have. Consider the story of IONA Technologies, where Christopher was an executive from 1997 until 2008. The company had terrifically talented people and very good products, but there can be no disputing that the blessing of good timing played a major role in its success.

IONA was founded by tenured computer science professors, Chris Horn and Sean Baker, at Trinity College in Dublin, Ireland in the early 1990s. The European Union commissioned Chris and Sean to research how to get all the different nations’ computer systems to work together in preparation for the tightening of the EU’s common market. In doing that research the professors discovered a powerful new software approach being developed by a consortium of enterprise software market participants into a powerful new standard for interoperability between different systems. The professors understood how big a problem computer interoperability was becoming and immediately recognized the commercial potential of this standard.

They decided to found a company to offer the world’s first commercial product based on the new standard. Their timing was perfect. It coincided exactly with the growing need for a new breed of software called middleware.  Middleware serves as a go-between layer of software integrating other existing software systems. They knew the middleware space was demanding, so they built a fast, powerful and secure product. Their launch timing was perfect, riding the wave of a rapidly growing awareness of the new standard. As a result, the company IONA was born with massive global companies such as Boeing, Lucent, and Motorola amongst its first customers.

Early revenue grew exponentially year over year in the early 1990s as the market for business software grew. Growth was also accelerated by the increasing excitement for the internet and for adding web capabilities into business software. This ultimately led to the frenetic dot.com era associated with the late 1990s.

In a second bout of near perfect timing, in early 1997 IONA chose to go public on the NASDAQ market with investment banking help from Lehman Brothers. The timing of this offering could not have been better given the dot.com boom. The market for technology stocks was not only hot for this kind of IPO, it would continue to rise to dizzying heights for several years to come.

Despite the company being a fairly specialized middleware player, IONA’s IPO ended up being among the top five largest software IPOs in history, and the largest since Netscape had gone public and kicked off the dot.com boom. Software was hot, and the company was in the right place at the right time to capitalize on the opportunity in front of them.

Although the dot.com era came to a crashing end in the early 2000s, Christopher recalls the company continuing to thrive commercially by combining a very loyal and stable customer base with a series of well-timed acquisitions and product pivots. “Company leadership paid attention to changes in the market,” Christopher said, “and were early promoters of emerging trends in software design. They were early to support the business use of web portals. Portals allowed companies to interact with customers directly over the web. The company was similarly early to support the software transition to web standards and service-oriented computing architectures (an early precursor to what we know today as the cloud.) This product nimbleness carried them through the post-dot.com crash years in the early 2000s.”

By 2007 fortuitous timing returned to the fore. The company had a large presence and many customers in financial services, so management had early warning of the impending financial meltdown of 2008. As the company was preparing to close its fourth quarter of 2007, two very large customer deals in financial services simply vanished overnight with little warning. Christopher said, “It was clear from talking to these large financial services customers that something serious was afoot in the financial world - more serious than most people grasped.”

Christopher was IONA’s CFO at that time. Not only did the company pre-announce to Wall Street that it was going to miss the financial targets it had set in its guidance to financial analysts, it also aggressively cut costs fearing the downturn that was to come. Because of the pre-announcement, the company’s stock dropped, lowering the company’s market capitalization and making the company a more feasible acquisition target.

A competitor in Europe told IONA of its intention to acquire the company. Unfortunately for the acquirer, but perhaps fortunately for IONA in terms of deal timing, the would-be acquirer’s bankers leaked details of the acquisition approach to the Irish business press.The resulting articles caused the company’s stock to move up on speculation of a deal.

The company was listed on both the NASDAQ market in the US and on the Irish Stock Exchange. The Irish Stock Exchange insisted that the company make what they called a market leveling announcement to make sure all market participants knew the company was the subject of a possible acquisition. NASDAQ’s rules required the company to mirror the disclosure in the US.  IONA brought its IPO banker Lehman Brothers back in and put out a Securities Exchange Commission (“SEC”) 8-K filing in February 2008 announcing that it had hired a banker and was reviewing its strategic alternatives. Fortunately for IONA, that led to terrific interest in the company. By March more than a dozen potential acquirers were evaluating the company.

March was also the month when the 2008 financial meltdown really started to accelerate. Bear Stearns finally succumbed to its overexposure to subprime mortgages and had to sell to JP Morgan for a small fraction of their former high flying value. As the financial world around it continued to grow more shaky, IONA worked on its deal process, narrowing down the pool of bidders and beginning due diligence reviews with the finalists.

As IONA’s deal progressed, the economy grew worse. By May, the extent of the mortgage crisis was becoming clear due to the situation at Countrywide Financial. Countrywide, which issued 17% of US mortgages, came under investigation by the FBI for mortgage fraud. They were a serious bankruptcy risk.

IONA’s deal continued forward and by June, they were in final negotiations with the ultimate buyer of the company. IONA filed a deal disclosure and investor proxy with the SEC at the end of the month.

July saw the snowballing financial mess gather momentum with a looming liquidity crisis at global insurer AIG. AIG, which had built a huge business insuring other financial companies’ bets on mortgage assets, spent the month making a series of announcements about how their liabilities looked likely to exceed their assets. As the month wore on, each shortfall estimate was billions bigger than the previous estimate. At the same time it was becoming clear to the world that storied investment bank Merrill Lynch was at risk of possible collapse due to having too much exposure to bad mortgage related bets.

Perhaps the greatest concern to IONA were the persistent rumors that Lehman Brothers was badly over-exposed to toxic financial instruments and at growing risk of failure. The Lehman Brothers team working with IONA repeatedly denied the rumors and promised there was nothing to worry about. They continually asserted they had heard from Lehman senior management that everything was going to be fine. Since IONA was three quarters of the way through a publicly disclosed acquisition, its leadership team really had little choice but to press ahead with the deal and rely on Lehman as their banker.

As the summer turned to Labor Day and the financial crises gave way to governmental attempts to staunch the bleeding, Christopher headed back to Dublin. After many trips to Dublin over the years, Christopher made one final journey to acquire shareholder approval for the deal at IONA’s annual general meeting of shareholders. By then it was clear that Bank of America was going to have to acquire both Countrywide and Merrill Lynch to stave off their collapses. AIG, Fannie Mae (the largest company in the US by total assets), and many other global financial firms were going to need financial bailouts. Lehman Brother’s fate was still up in the air, but increasingly dire rumors about them were swirling.

IONA obtained shareholder approval to complete the deal in early September. With approval in hand, Christopher returned to Boston to finalize the closing of the deal. The news was dominated by stories of major financial firms and markets failing, and it was beginning to look like a miracle that the deal might actually be completed. Any doubts about whether the buyer was offering a good price had long evaporated by that point. The alternative option of staying independent and trying to maintain revenue looked less and less attractive in the gathering downturn.

IONA and Lehman Brothers pressed ahead and were ready for the final closing on Friday, September 12th. The day came, the signatures were exchanged, the money was wired, the SEC filings and press announcements were made, and the deal was officially closed. The following morning, Saturday, a mere eighteen hours after the closing, it was announced that Lehman Brothers was bankrupt and was shutting down. Having closed IONA’s acquisition on Friday night, Lehman’s 161 year history came to an end with a Chapter 11 filing that Monday morning.

Due to its perseverance, and by dint of some tremendously lucky timing, IONA managed to complete a successful sale while the global economy crumbled around them, and their investment bank teetered on the brink. Christopher recalls the feeling of selling the company that September of 2008 as similar to “running from a burning building.”

To this day, Christopher marvels at the incredible power of perfect timing. In this fourth theme of the book, we will explore the powerful role of timing in several other startup stories. It is true that good timing alone cannot guarantee the success of a company. Timing falls more into the category of things that are “necessary but not sufficient.” But timing undoubtedly plays a major role in startup outcomes. Christopher had many experiences at IONA and learned innumerable lessons, but perhaps the most important lesson he took away is that having good luck on timing might be the best luck of them all.

Interested in reading more stories about key startup themes and lessons learned? View the entire collection here in The Seraf Compass or purchase the book on Amazon in paperback or Kindle format.

Leaders Are Made Not Born

Read Article for Leaders Are Made Not Born