Can't Afford Not To; Key Patent Issues For Angel Investors

Startups, particularly in complex technology fields, often rely on the exclusivity granted by patents to build competitive advantage in the marketplace. Unfortunately, the average time an applicant waits to receive a first Office Action from the United States Patent and Trademark Office (PTO) is about 19 months from submission of the patent application. Even worse, the total time until the patent is allowed is actually about 27.5 months, and nearly 38 months if the applicant files a request for continued examination.

In the land of startups, the delay built into this first hurdle can significantly delay financing opportunities and product development efforts. Until a new venture understands the potential breadth of their exclusive competitive advantage, it is hard to know in which direction to take a product, hard to understand whether to file for more global protection under the Patent Cooperation Treaty (PCT), and very hard to convince investors to share the risk.

Fortunately, there are a number of different programs offered by the PTO that allow patent applicants to significantly advance the pace of patent prosecution. Some of these programs are open to all types of patent applicants if they meet certain requirements. Other programs have specific requirements related to the technology field or the age or health of the inventors. Because speed to market is so crucial to startups trying to gain market share, and because their resources are very limited, use of these programs is often a faster, cheaper, and more efficient path to building the business.

Four options that are open to most every patent applicant are: (1) Track One Prioritized Examination; (2) Accelerated Examination; (3) the Patent Prosecution Highway; and (4) the First Action Interview Pilot Program. While each of these four programs has specific requirements for entry, those requirements are within the control of the applicant.

Qualify by: A request must be made concurrently with an initial or continuing patent application filing, or concurrently with the filing of a Request for Continued Examination (RCE). The most significant hurdle for many patent applicants is the cost to enter this program. The undiscounted government filing fee is $4,140. Small entities, however, need only pay $2,070, and micro entities need only pay $1,035. Startups traditionally qualify as small entities, and may be able to qualify as micro entities. While this amount of money up-front may seem steep, the investment often provides a good return when matched against wasted time in product development or fundraising.

An application is only eligible if it contains no more than 4 independent claims and 30 total claims throughout its pendency. While technically there is a limit of 10,000 requests for PE per year, this limit has never been approached. Additionally, applicants have 3 months to respond to any Office Action. This deadline can be extended in the same manner as under normal practice for an additional 3 months, but any extension of the deadline results in the application being removed from the PE program and returned to the normal examination timeline.

Currently, the allowance rate in the PE program is about 46%, meaning nearly half of applicants in the PE program are having patents issued within 12 months of filing and without having to pay expenses associated with RCEs. Considering about 30% of all new applications filed at the PTO are RCEs, achieving allowance without an RCE is an attractive and cost-effective prospect.

Benefits: Similar to the PE program, the Accelerated Examination (AE) program is intended to help applicants obtain a disposition within 12 months of the initial filing of the application.

Qualify by: A request must be made concurrently with an initial or continuing patent application filing. Unlike the PE program, the request cannot be made with the filing of an RCE, although the filing of an RCE during an AE examination does not remove the application from the AE program. Also, in contrast to the PE program, the cost to enter the program is not a significant hurdle. The fee is only $140, $70, and $35 for undiscounted entities, small entities, and micro entities, respectively.

The most significant hurdle for many patent applications to enter this program is instead the requirement for the applicant to provide both an AE Pre-Examination Search Document and an AE Examination Support Document. The AE Pre-Examination Search Document illustrates the search logic used to conduct the required pre-examination search, while the AE Support Document explains with some level of particularity why the pending claims distinguish over the most pertinent prior art identified by the applicant. To date, applicants have been reluctant to use the AE program, likely because of the significant expenses that would result from producing these supporting documents, and the requirement to characterize prior art on the record before a rejection is even made.

The other requirements related to the AE program are also more stringent when compared to the PE program. For example, an application is only eligible for AE if it contains no more than 3 independent claims (as opposed to 4) and 20 total claims (as opposed to 30) throughout its pendency. Further, while the PE program allows applicants a 3 month time frame to reply before removing it from the program, the AE program only affords applicants 1 month to reply to an Office Action. The penalty for failing to meet this time frame is even more severe—the application goes abandoned, as opposed to just returning to the normal examination pool. Applicants do have the option of filing a continuing application to prevent the subject matter from becoming abandoned.

The time and expense associated with the AE program, and the risk of commenting on prior art on the record, often leads startups finding the PE program the more preferable of the two programs.

Benefits: The Patent Prosecution Highway (PPH) program is a bit different from either the AE or PE programs because entry into the PPH program does not aim for a final disposition within 12 months.

Many of the countries in which startups may be interested in pursuing patent protection participate in the PPH program, including Australia, Canada, China, Japan, South Korea, and most countries in Europe (via the European Patent Office). After submitting to the PTO a claim that was granted by another patent office that participates in the PPH program, or a favorable international search report (i.e., a report indicating that at least one claim has novelty, inventive step, and industrial applicability), applicants typically receive a first Office Action within about 5 months.

Qualify by: Beyond the requirements set out above, a patent application is only eligible to be part of the PPH program if no substantive examination has occurred in the U.S. There are no additional fees associated with the PPH program.

Benefits: The First Action Interview (FAI) pilot program expedites prosecution only after the application has been picked up by the examiner. There is no special treatment given to the application before the first substantive Office Action. However, once the FAI program begins, prosecution is more compact. The examiner issues a First-Action Interview Office Action, which is a shortened version of a regular Office Action. This provides a high level overview of the bases for the rejection. The applicant then has 30 days (plus another 30 days upon extension) to reply by initiating an examiner interview.

The goal of the program is to use the interview to discuss the rejections and reach agreement on allowable subject matter. If agreement is not reached, any subsequent Office Action proceeds in the normal fashion without any expedited treatment. There is no cost to participate in the FAI pilot program, and the result can be a quicker path to allowance because it eliminates some of the usual written back and forth between patent counsel and the PTO. Applicants participating in the FAI program have received first action allowances over 30% of the time, compared to 13% for all other new, non-continuing applications. Even in instances in which a first action allowance is not achieved, the expedited treatment of the patent application under the FAI program still benefits the applicant.

Qualify by: Often applicants do not know when they initially file a patent application whether they want to take advantage of the FAI program. However, at some later date they may decide the expedited treatment received in the FAI program is preferable. Fortunately, an applicant has the ability to request entry into the FAI program any time before substantive examination has begun at the PTO.

While applicants can request entry into the FAI program at some point after filing, often applicants forget to submit such a request prior to receiving the first substantive Office Action from the PTO. Once the first substantive Office Action is received, the request is no longer timely. One tactic that can be used to help prevent this occurrence is to draft claims that encourage the PTO to issue a Restriction Requirement.

Two additional options exist for some patent applicants to expedite prosecution: (1) Petitions to Make Special Based on Enhancing Environmental Quality, Contributing to the Development or Conservation of Energy Resources, or Contributing to Countering Terrorism (the “Impact Program”); and (2) Petitions to Make Special Based on Applicant’s Health and/or Age (the “Applicant Program”). As the names imply, only a limited number of applicants are able to take advantage of these programs.

Benefits: Once a petition is granted in the Impact Program, the application is effectively sent near the head of the line to be reviewed. While the PTO does not provide a goal for final disposition of these types of cases, it does handle them on an expedited basis so that they are reviewed more quickly than regularly filed applications throughout the course of prosecution.

Benefits: As in the Impact Program, once a petition is granted as part of the Applicant Program, the application is effectively sent near the head of the line to be reviewed, and is given expedited treatment in review.

While the program(s) best suited for a startup company will depend on many circumstances, the four programs startup companies may want to give the most consideration to are those that do not involve preparing an AE Pre-Examination Search Document and an AE Examination Support Document, i.e., the PE program, the PPH Program, the FAI program, and the Applicant Program. The PE program may be particularly useful to startup companies that have also filed a PCT application. For about $2,000 the startup company can have a good sense of the strength of its patent application based on the U.S. prosecution before making costly decisions about entering various foreign countries following the PCT application. Further, if a patent is granted, the startup company can leverage the quick allowance for further investments.

Startup companies with limited resources should be diligent in investigating and using these patent programs to expedite the review of their patent applications and to decrease their overall patent prosecution costs. Obtaining early feedback on applications, or having patent claims allowed, substantially reduces the risks to these companies and may provide a massive value inflection point for potential investors. 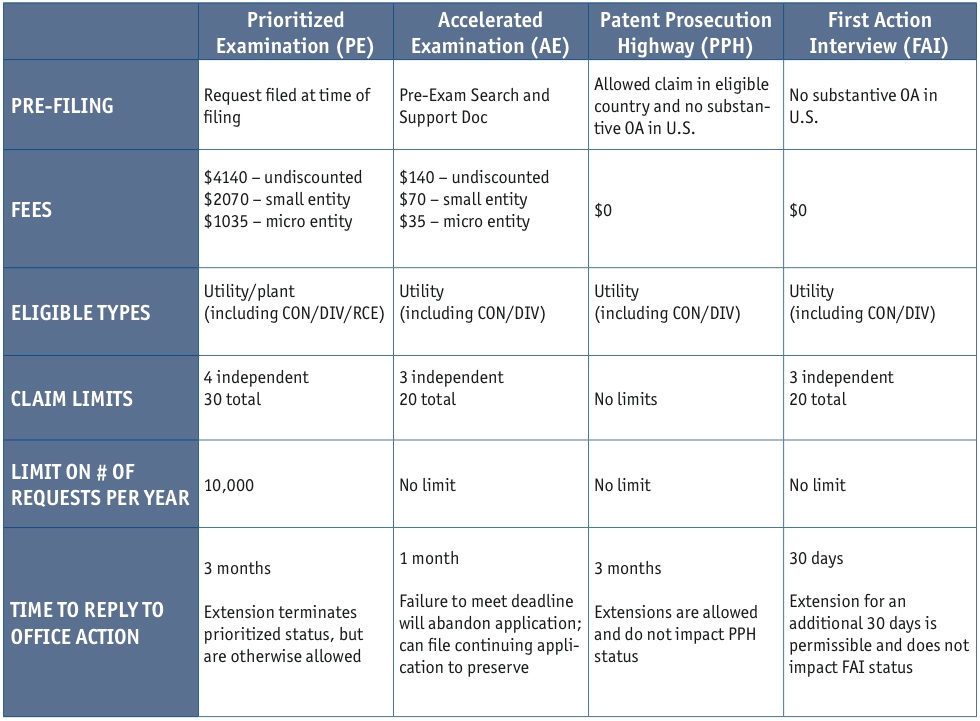 Nutter McClennen & Fish LLP has deep roots in Boston and a long-standing reputation for business savvy and pragmatism. Their service model relies on teams of subject-matter experts using their knowledge of the market, the players and the law to help clients get things done. Clients have access to a broad platform of legal expertise and resources in business and finance, intellectual property, litigation, real estate and land use, labor and employment, tax and trusts and estates.

This article is for information purposes only and should not be construed as legal advice on any specific facts or circumstances. Under the rules of the Supreme Judicial Court of Massachusetts, this material may be considered as advertising.

Making the Board Work for Founders

Read Article for Board Dynamics - Making the Board Work for Founders